How I Fell In Love With Sound Design

Being an audiophile and videophile at the same time can be a curse—but it makes all the difference! 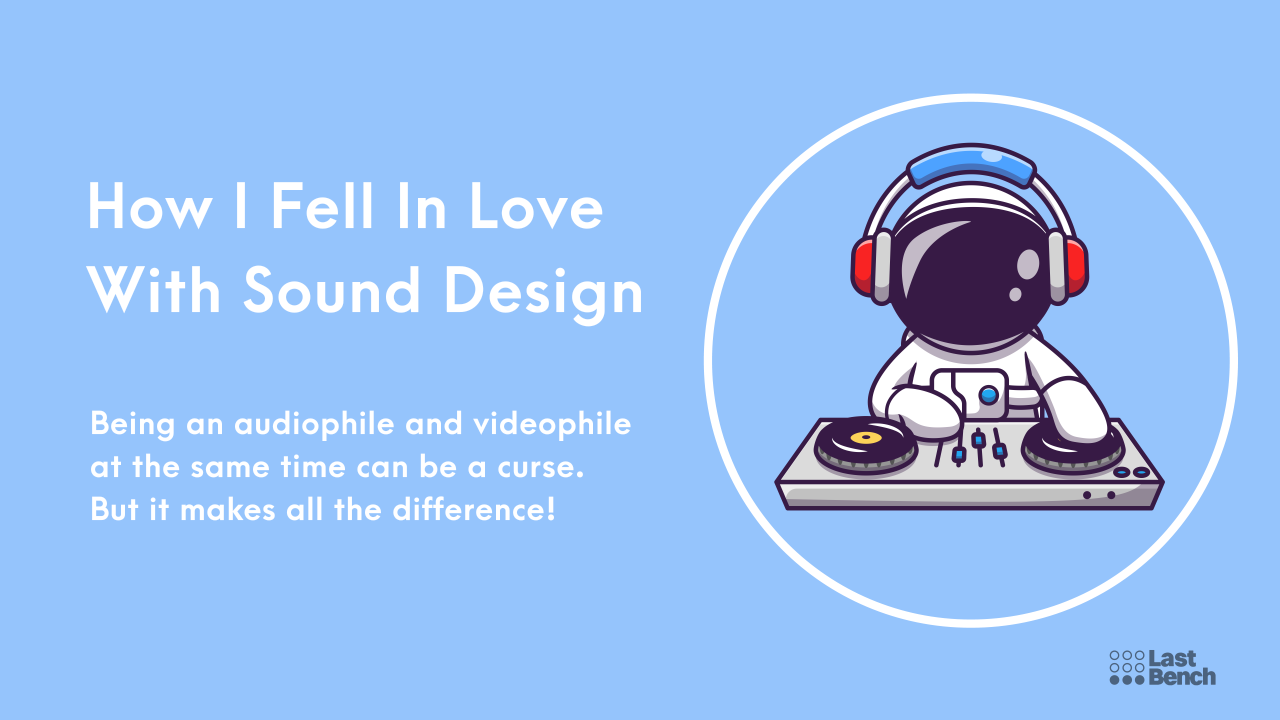 There was a time when movie trailers came with a typical style of voiceovers that gave away the gist of what is to know about the movie—that deep, spooky and powerful voice that we've all imitated at some point. Fortunately enough, we've stepped away from that trend over the past decade and managed to get these trailers to look even more enjoyable. So what replaced it? Exactly! Good ol' sound design.

My first introduction to sound design was from this audio clip called 'virtual barbershop' that I got a chance to listen to about fifteen years ago.

That was probably the first time I paid my undivided attention to somebody speak, and it felt so rejuvenating. The audio was an experiment on three dimensional sound. And mind you, in a time when Dr Dre's Beats and the 'Bose's and 'Sony's weren't even in the picture, the barbershop squad defined the catchphrase 'listening to sounds the way it's meant to be heard.

It wasn't a couple of years after that when I probably started noticing how editors infused this sorcery into their videos. It almost added a whole new dimension to them.

My early inspiration has always been Sam Kolder. Initially, I couldn't comprehend much of what was going on with his sounds. A few of my audiophile friends broke down what goes into sound-design. Pair that with binge-watching some insane tutorials by Peter Mckinnon and my love for the Kolder videos just amplified ten-fold.

Being an audiophile and videophile at the same time can sometimes turn out to be a curse. More often than not, you'd find yourself trying your best to listen to that subtle swish and can-pops or even the reverbs echoing at the back of your head and still feel like there was a disconnect between the visuals and the sounds. On the bright side, you start noticing more! And here I discovered something new (from a couple of YouTubers, of course). The actual sound that we're scouting to accentuate an action may not be the perfect match for it. In the most literal sense, it's kind of like finding a dubbing artist for a visual/action just because the original sound may not sound too appealing enough.

A great example would be the screech of an eagle that you would've been used to listening to in most movies and videos, except that it's most likely the sound of a hawk.

Or even the car crash from an action sequence, which is most likely from someone hitting their kitchen counter with a steel vessel, or a shark swimming underwater could be the sound of an F16 infused with a low pass filter and EQ adjustments and so on.

Making impactful videos is all about getting you to hit in all your senses at the right time, and that combination of a bald eagle's visual with the hawk's screech would do you just that. This is exactly what foley sounds are all about.

So the first time I ever got to dabble around with sounds in their most basic form was for an explainer video that I worked on for an education-based client.

The idea crept onto me when I was nearing the second draft's completion, and I felt that the logo reveal wasn't that impactful enough. Watching it repeatedly just made it look all the more empty. A simple sound of a crash cymbal played in reverse, logically placed before right before the logo swooped in changed that for me, making that build-up much more effective.

The second and probably my first full-fledged sound design project was for a 'VOX' style video project for a climate school. The whole workflow came out to be both enjoyable and stressful at the same time that I'd constantly want to go back to it and add another layer while still being convinced that it wasn't enough (it is never enough!). I firmly believe that this project just unlocked something new for me, and I'd never been more excited about taking on more projects before. And that finally led to my most recent collaboration for a Women's Day video (above).

This was probably that ultimate project I'd been subconsciously looking for all my life, and it was such an experience I'd always cherish. This was a video where I got to explore layering, panning and creatively playing around with foley sounds coupled with some ambients that consequently added a lot of depth to the visual story we were trying to tell.